This is so important, I have to share it.

Below is a video of Carol Gilligan, giving a talk at MIT about relationship, love, and voice in developmental psychology, ethics, and politics.
Title: “Learning to See in the Dark: The Roots of Ethical Resistance” (April 24, 2009).
You can also find it here: http://mitworld.mit.edu/video/729

Some extracts from Gilligan’s talk (I transcribed them from the video):

28:14
“We have been wedded to a false story of human nature. And it’s a falsely gendered story. It’s a wrong story about men, and boys, it’s a wrong story about girls and women. And if you think about it for one nanosecond, you know it’s wrong. Because to say that men think and women feel -in other words that men don’t feel and women don’t think, or that men have selves, and women have relationships… Because if you don’t have a self, then who is in relationship? Or that our minds are separated from our bodies.. In other words it’s something that’s so obviously wrong as a description of human experience, that the interesting question is: How come people keep talking about it?”

31:37
Gilligan talks about how both boys and girls are firstly, in development, very relational beings, and how they later learn, in the case of boys, to start to become less related in favour of being autonomous individuals, and in the case of girls, to give up their voice and their sense of self in order to maintain relationships. “I wanna give you a five-year old boy’s reading of his world, namely his family. His father -the parents were in the midst of a divorce, and on christmas, the father as he would say ‘lost it’, and hit his five-year-old, and then was overcome with remorse because he had been hit by his father and he had vowed to break the cycle. So the next day he says to his five-year-old “I’m so sorry, I didn’t mean to do this, I don’t ever want to do this again.” And the five-year-old said to him: “You are afraid that if you hit me, when I grow up, I’ll hit my children.” That’s a five-year-old boy.
Now if that’s where we all start, this is very hopeful, I think, in terms of ethics and transformational values. Because the problem happens when we lose that capacity”

32:40
“We are fundamentally relational, responsive beings as human beings, men and women alike. But there’s an initiation driven by gender that leads to a series of inner splits that happen, that boys are pressured to make, and resist, around the ages of five to seven, and girls later.”

34:38
“Patriarchy is an order of living that’s based on a gender-binary and a gender-hierarchy. The gender-binary is that to be a man means not to be a woman. So whatever is gendered feminine is thought of as therefore qualities that are not associated with being a man. And the hierarchy is that the qualities associated with masculinity are elevated.”
“If you think of the splits -reason/emotion, mind/body, self/relationships, you know how they’re gendered. Mind, self, thought, is gendered masculine and elevated. Emotion, relationships and body are gendered feminine and like women idealized and devalued.”

36:00
“There’s a convergence now of findings from developmental psychology and neuroscience that puts in place a very different story about us as humans and says that when these splits occur, they are signs of injury or trauma.”

41:00
“We are born with a voice and into relationship. And if those capacities are encouraged, not traumatized, then we are able to register within ourselves the feeling of what happens and that’s the ground -I think there’s a growing consensus- for ethical action, to be in touch in that sense.”

43:20
“The optimism that is at the core of this work, and that is actually riveting to me at the present moment, is that the very capacities of our nature, the capacity -we have a voice- to communicate with other people, and to live in relationship, to resolve conflicts in relationship, are the grounds both, they are the requisites of love, but they are also the requisites of democratic citizenship. So, our human nature, qualities that are ours as humans are aligned with love, and aligned with democratic forms of living. So if you are going to set up a patriarchal structure, you have to break those capacities, you have to traumatize them, and the result is dissociation.”

44:40
“I want to say in conclusion that what patriarchy precludes is love between equals. And therefore it precludes democracy, which is founded on such love, and the freedom of voice that it encourages.”

Later, I will write something here on why I find this so important… 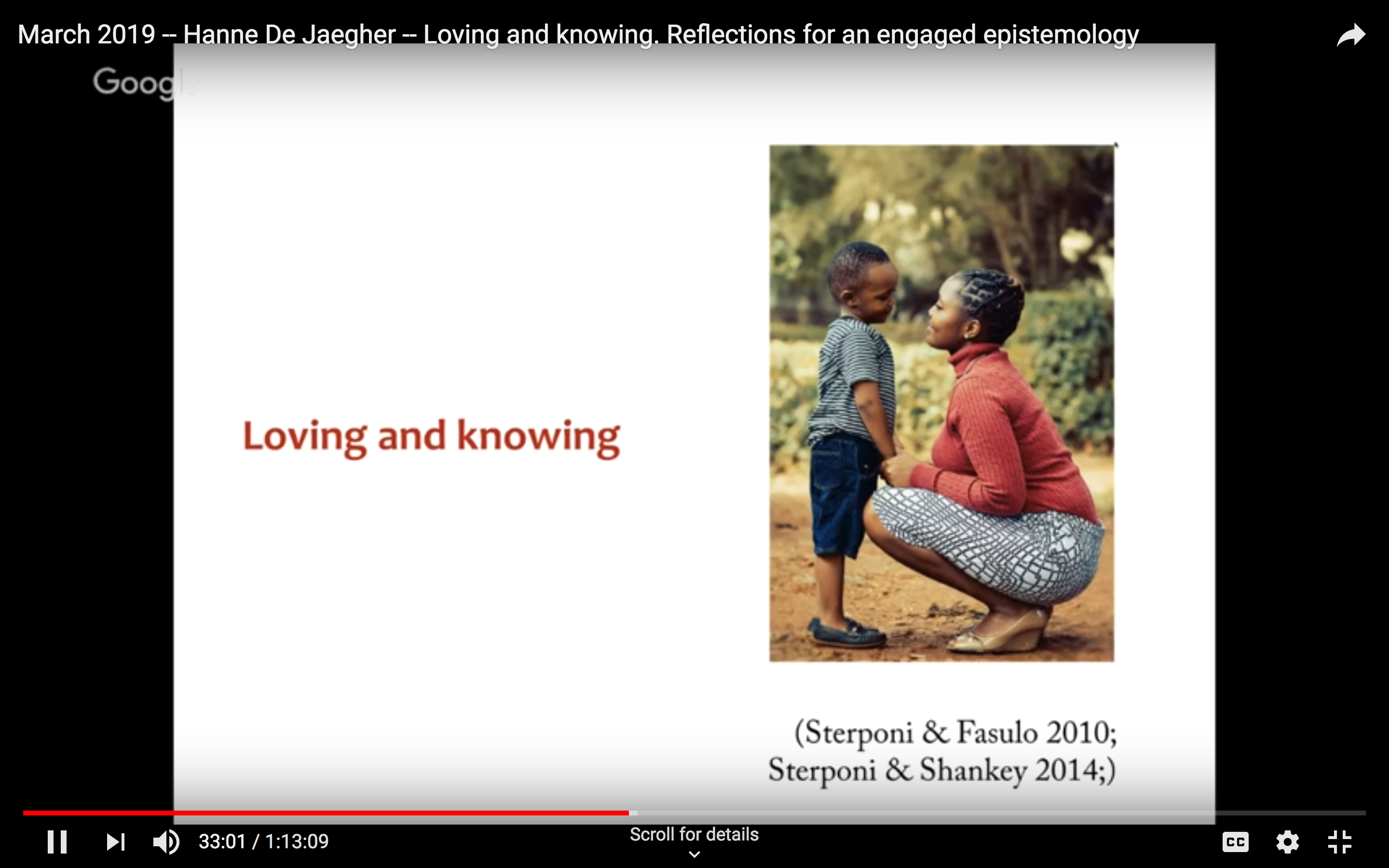